Agents and Brokers are paid by the insurance company, not the client.

Covered California enrollments assisted by Certified Insurance Agents are producing a minimum of $9.2 million per month in commissions as estimated from enrollment statistics released by the states ACA exchange. While this number may sound impressive, a good chunk of the enrollments were for individuals and families who already had health insurance. With many health insurance companies paying lower commissions for ACA health plans the California agent and broker community is probably experiencing a net reduction of income.

Agents assisted with 39% of enrollments

Health insurance companies guard their enrollment data as best they can for obvious reasons of market competition. A variety of statistics can be gleaned from different regulatory and rate filings the carriers must submit. The Covered California enrollment data gives some general information as to market share and demographics for individual and family plans (IFPs) purchased through the exchange. This high level data coupled with a little research on rates and health plans can begin to estimate a fuzzy snapshot of the amount of premium revenue generated for each carrier and potential commissions paid to agents. Download the Covered California press release with statistic and full spreadsheet at end of post.

The first step in estimating monthly agent commissions paid by the carries was to determine their monthly premium revenue generated. Some of the carriers havetransitioned toreimbursing agents a flat fee per person per month. But many carriers still pay a commission percentage based on the total monthly premium amount for the individual or family members. Complicating the commission estimate is that one carrier reduced their commission in the middle of open enrollment and its unclear from my research if certain carriers are even paying a commission on any enrollments assisted by agents.

In short, for estimating the monthly premium of carriers that pay a commission based on a percentage, I combined the enrollment data by carrier and then applied the Covered Californiastatistics for enrollment by age and plan selection distribution. From there I plugged in monthly premium rates for the different carriers by age and plan type. Inherent extrapolation problems occur because each plan has a unique premium rate by age and I only had an age range to work with. In addition, several carriers sell into multiple regions which also have a certain amount of variation between the premium rates. (For a more detailed explanation of my methodology for estimating premiums see: Covered California generates $583 million in monthly premiums)

Next, I applied the percentage of enrollments that Covered California said were handled by Certified Insurance Agents: 39%. The monthly premium attributed to agents was then multiplied by the known commission amount to yield the final number. The Anthem Blue Cross Chinese Community Health Plan commission estimates are based on their stated first year per member per month rate. For Kaiser, their one-time commission rate was divided by 12 to get a monthly rate. The least reliable figure is that of Health Net because they reduced their commission rate during open enrollment. A couple plans I was able to find no commission structure information about: Contra Costa HP and Valley Health Plan. At least one, Contra Costa Health Plan, may not be paying any commissions. (see Agents work for free blog post)

Each carrier deviates from the average

The final minimum estimate for commissions being paid to health agents and brokers for IFPs through Covered California is $9.2 million per month. The amount that a health plan actually pays will vary on a number of factors from the membership age distribution to plan selection. L.A. Care is reporting that 81% of their new members selected the Bronze plan. This number is dramatically different from Covered California who reported that of total enrollment only 25.74% chose a Bronze plan.

Is the commission structure efficient?

It was a discussion in a Covered California Certified Insurance Agent group about Maryland scrapping their SHOP website in favor of agents that got me thinking about the potential efficiencies of agent enrollment over customer service center at the state exchange. Specifically, are the commissions paid to agents by the health plans a more efficient and effective use of resources than wages paid to employees of the Covered California state insurance exchange? Even though I was able to calculate that a minimum of $9.2 million monthly commissions are being paid to agents from Covered California enrollments, the lack of expense data for the call center precludes making any meaningful comparisons.

It is very difficult to come to any sort of conclusion about the cost effectiveness of enrolling by agent versus the call center staff. There just isnt enough cost data available pertaining to the Covered California call center operations to affix a cost per unit. Covered California added several hundred call center service personnel mid-way through open enrollment so any budgeted dollar amount for the 2013-14 fiscal years would probably be low.

No attribution for assistance Another expenditure that is hard to find is the final cost for the Certified Enrollment Counselors who were paid $58 per application. Covered California estimated that the CECs and the service center staff each enrolled approximately 9% of all individuals each. Of course, no points were awarded to the service center staff for their assists by helping consumers, and agents, clear the hurdles and reach the goal of completed enrollment. I fielded hundreds of calls from agentsand California residents and answered their questions as best I could. The overwhelming majority of these folks went on to enroll in a Covered California plan without designating me as their agent. Many agents assisted people for whom there will be no compensation.

A deeper economic analysis is necessary

One reality is crystal clear, as an outsider, it is hard to find published figures about expenditures made by Covered California regarding their enrollment operations. Equally, if not more secretive, are the commissions paid by the health plans to agents. The lack of available data stymies anyones ability to assess the relative efficiency of enrollment between and hourly wage staff person and a commissioned agent or broker. This is an economic analysis that probably should be done to help Covered California and other state based exchanges make decisions about how best to allocate their limited resources during future open enrollment periods.

Press Release and summary of enrollment statistics by Covered California. Included are demographics, distribution of enrollment by age and plan selections, along with type of enrollment assistance: agent, website, call center, CEC.

Spreadsheet and worksheets calculating monthly premiums generated by the health plans participating in Covered California. Statistics released by Covered California were used to generated an estimate of commissions paid to agents and brokers on a monthly basis. 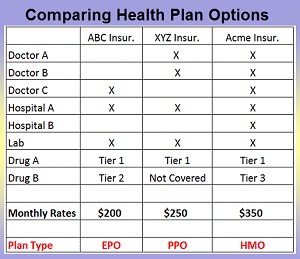